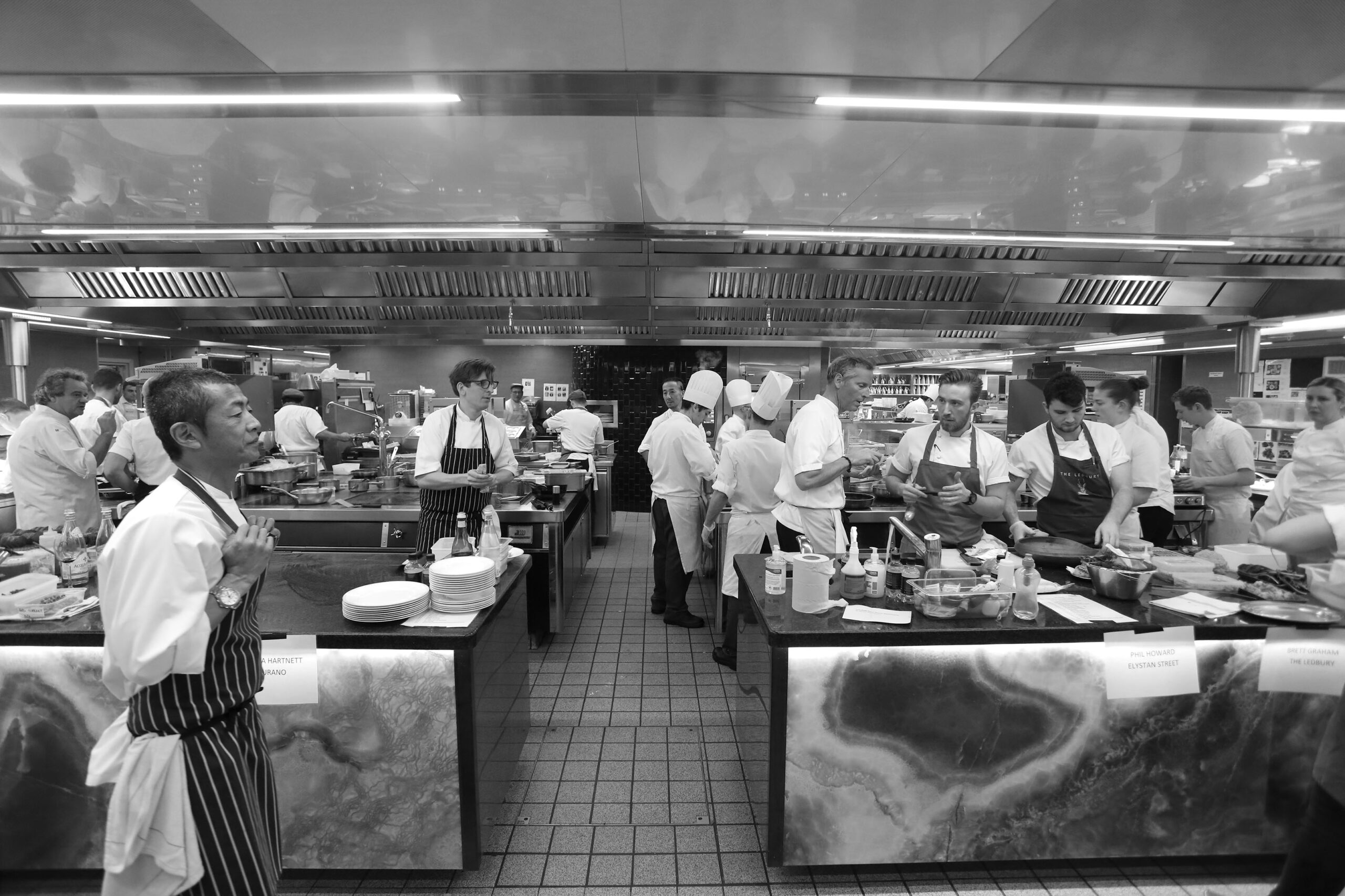 For the past 24 years, Leukaemia UK, the leukaemia research charity dedicated to accelerating progress in diagnosis, treatment and care, has hosted the acclaimed, “Who’s Cooking Dinner?”, a fundraising event founded by restaurant luminaries Chris Corbin OBE and Peter Gordon.

On Monday 19th September, the dinner will be returning after a 2 year hiatus taking place in the Ballroom at The Dorchester, Park Lane. The hiatus, forced by the coronavirus pandemic that caused the hospitality industry so much hardship, has meant that this year Leukaemia UK is partnering with Hospitality Action, with proceeds from the evening being split between the two charities.

The evening will bring together some of the world’s most exciting and beloved chefs, with the likes of three Michelin starred Simon Rogan, two Michelin starred Isaac McHale of Clove Club, Marx Hix, Phil Howard and The Galvin Brothers taking part. The list of confirmed chefs to date for the evening are:

Chris Corbin, one of the co-founders of this spectacular event, is the Chair of Leukaemia UK and one half of the duo Corbin & King that turned The Ivy, Le Caprice, J Sheekey and The Wolseley into London’s sought-after eateries. At the age of 38, Chris was diagnosed with chronic myeloid leukaemia and for the next four years, he and his family were left in limbo while they waited for a suitable bone marrow donor.  In 1994 Chris was matched with a donor and underwent a successful bone marrow transplant. Over the past 20 years this extraordinary dinner has raised over £7 million for leukaemia research.

Chris Corbin, Chair of Leukaemia UK and co-founder of the event, said:

“Who’s Cooking Dinner?, is a unique event, which has gone from strength to strength since its inception over two decades ago. It brings together the hospitality community and raises vital funds to stop leukaemia devastating lives. It celebrates both gastronomy and science, and the incredible power research has to accelerate progress in diagnosis, treatment and care.”

“The hospitality industry and those who work within it were amongst the hardest hit by the economic impacts of Covid-19.

Sadly, we’re not out of the woods yet; reduced working hours and rising prices are forcing more hospitality households into poverty and debt. Ann it’s especially difficult for families already dealing with physical or mental health problems. But ours is a resilient and compassionate industry filled with hard working driven people who are willing to go the extra mile to help a friend in need.

Together with Chris Corbin and Leukaemia UK we’ve assembled a stellar roster of chefs to represent the diversity, breadth and vibrancy of our amazing hospitality industry.”

“I have been involved in this event for Leukaemia UK for many years now and have seen the fantastic work the proceeds from it go towards. As a chef, I feel incredibly fortunate to be able to contribute towards this wonderful cause to help fund leukaemia research. Leukaemia UK’s “Who’s Cooking Dinner?” event is an opportunity not only to make a difference but to work alongside other incredible chefs that you may not get the chance to see very regularly. I’ve met some wonderful people there both on the night and later those who bid for The Ledbury via the charity’s Grand Auction, which is where we as chefs put ourselves up for sale to cook in people’s homes.”

“Who’s Cooking Dinner?” is the question asked by the guests of each table, who only discover on the night which chef in the all-star line-up will be expertly creating their four course meal.

Beginning with a champagne reception and the surprise “Chef Draw” when guests learn for the first time who will be cooking for them on the night, the evening will feature a four course menu with matching wines followed by celebrity entertainment and the now famous Grand Auction, given guests the chance to bid for their favourite chef to cook a bespoke dining experience in their home.

View all
AML: How do leukaemia cells avoid the Notch pathway?

AML: How do leukaemia cells avoid the Notch pathway?

Leukaemia UK is delighted to continue its investment and funding for early career scientists and clinicians in 2022.

AML: What is the importance of vascular niches?

AML: What is the importance of vascular niches?

Kenza: I learned leukaemia can affect anyone

Kenza: I learned leukaemia can affect anyone